Explore Acoma in a way never before seen. Haakú Museum showcases the history, art, and lifeway of the Acoma people that has endured for a thousand years.  Located within the 40,000-square-foot Sky City Cultural Center, in the pristine Acoma Valley, Haakú Musueum focuses on the preservation of Acoma history and the revitalization of lost art forms.

The primeval black basalt terrain of El Malpais was created by volcanic forces over the past million years. Molten lava spread out over the high desert from dozens of eruptions to create cinder cones, shield volcanos, collapses, trenches, caves, and other eerie formations. This stark landscape preserves one of the best continuous geologic records of volcanism on the planet.

Narrows Rim Trail is a 7.8 mile out and back trail located near Cubero, New Mexico. You can hike any time of the year.

Mt. Taylor is a volcanic field west of Albuquerque.

Situated on the Continental Divide you walk through the twisted, old-growth Juniper, Fir and Ponderosa Pine trees, over the ancient lava trail to the Ice Cave. Here the natural layers of ice glisten blue-green in the reflected rays of sunlight. Another trail winds around the side of the Bandera Volcano to view one of the best examples of a volcanic eruption in the country. Located in the heart of El Malpais, the historic Ice Cave Trading Post displays ancient artifacts as well as contemporary Indian artwork.

The Zuni Pueblo is nestled in a scenic valley, surrounded by the enchanting mesas, located about 150 miles west of Albuquerque. The main reservation, is located in the McKinley and Cibola counties in the western part of New Mexico. The estimated number of acres encompasses about 450,000 acres. The tribe has land holdings in Catron County, New Mexico and Apache County, Arizona, which are not adjoining to the main reservation.

Petroglyph National Monument protects one of the largest petroglyph sites in North America, featuring designs and symbols carved onto volcanic rocks by Native Americans and Spanish settlers 400 to 700 years ago. These images are a valuable record of cultural expression and hold profound spiritual significance for contemporary Native Americans and for the descendants of the early Spanish settlers.

Red Rock Park is the crown jewel of Gallup’s parks and recreation system. Cradled by spectacular red cliffs formed over 200 million years ago in the Age of the Dinosaurs, the park combines a glimpse into past civilizations with modern amenities to serve the needs of contemporary residents and guests.

Imagine the comfort and refreshment of finding water after days of dusty travel. A reliable waterhole at the base of El Morro has provided weary travelers a place to stay for hundreds of years. Here, Ancestral Puebloans, Spanish and American travelers carved over 2,000 signatures, dates, messages, and petroglyphs. We invite you to make El Morro a stopping point on your travels.

Today the massive buildings of the ancestral Pueblo peoples still testify to the organizational and engineering abilities not seen anywhere else in the American Southwest. For a deeper contact with the canyon that was central to thousands of people between 850 and 1250 A.D., come and explore Chaco through guided tours, hiking & biking trails, evening campfire talks, and night sky programs.

The Bisti/De-Na-Zin Wilderness is a rolling landscape of badlands which offers some of the most unusual scenery found in the Four Corners Region.  Time and natural elements have etched a fantasy world of strange rock formations made of interbedded sandstone, shale, mudstone, coal, and silt.  The weathering of the sandstone forms hoodoos – weathered rock in the form of pinnacles, spires, cap rocks, and other unusual forms.  Fossils occur in this sedimentary landform.  Translated from the Navajo language, Bisti (Bis-tie) means “a large area of shale hills.”  De-Na-Zin (Deh-nah-zin) takes its name from the Navajo words for “cranes.” 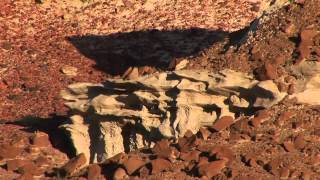 Go to Top
Thank You

Thanks for contactng us!  We’ll get back to you soon.

Type a word or phrase in the search field below. If you are unable to find the information you are looking for, please contact us.